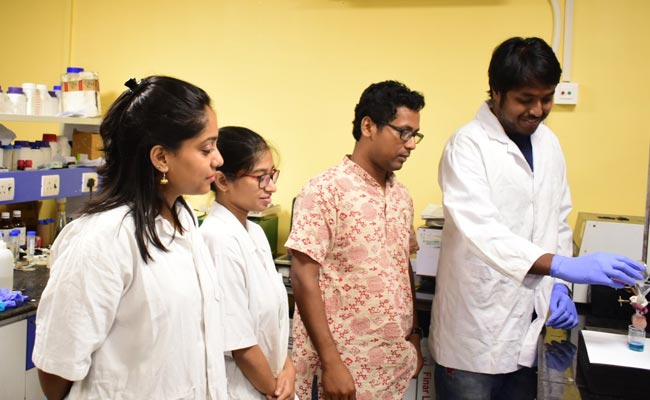 New Delhi: Indian Institute of Technology Guwahati Researchers have developed two distinct and special membranes that can separate oil and water, even under harsh conditions. The membranes that are super-water repellent in air, and super oil-repellent in water, can separate complex mixtures of oil and water at practically relevant settings. Oil-water separation is all the more important considering its environmental applications like oil spill management.

The team then developed a prototype of oil-water separation device using these membranes such that the separated oil and water were simultaneously collected in different containers.

Speaking on the need to develop materials that can separate oil and water, Dr. Uttam Manna said, “Oil-water separation is of current relevance because many industries, such as mining, textiles, food and petrochemicals, produce massive volumes of oily wastewater, which must be treated before discharge.”

There have been many studies on materials and techniques that can separate oil and water. In recent times, materials scientists have taken cues from nature, for this purpose. The lotus leaf for example, is water repellent so that it does not get soggy in its living space. Fish, on the other hand, has a body surface that repels oil in order to survive in polluted waters.

Scientists have studied the surface structures of lotus leaves and fish scales to understand what gives them their superhydrophobicity (super-water repellence) and superoleophobicity (super-oil repellence), respectively, so that these structures can be replicated artificially for oil-water separation applications. Thus, lotus leaf-inspired superhydrophobic materials and fish scale-inspired superoleophobic materials have been developed–following a single and unique deposition process and tested for gravity-driven removal of oil from water.

While these bio-inspired membranes are individually used to separate oil and water in the recent past, there is accumulation of water or oil on the membrane over time, which blocks further separation.

“There is yet another problem with conventional demonstration, where the superhydrophobic and superoleophobic materials are mostly used for two phase oil/water mixtures. However, those approaches are inappropriate for separation of three-phase mixtures of heavy oil, light oil and water,” added Dr. Manna.

In order to overcome the above problems, Dr. Manna and his team developed a system of ‘super liquid repellent’ materials, by combining the lotus leaf superhydrophobicity and fish scale superoleophobicity. Layer-by-layer deposition technique was used to obtain alternating layers of ‘chemically reactive polymeric nano-complex’ and ‘amino graphene oxide nanosheets’ on a stretchable and fibrous substrate.

The durable and stretchable membranes that the team developed were super-water-repellent in air and super-oil-repellent in water.