You are here HomeCompaniesOpinion: Differences Between PM Modi, Manmohan Singh In Economic Reform

Thirty years ago, India endured its last big financial crisis when it had to send gold held in the central bank’s vaults over to London to borrow hard currency from the Bank of England. Luckily, the flights landed safely, and so did India.

The turnaround in economic thinking triggered by that balance-of-payments humiliation saw the state shed controls on production and imports. The emergence of a globally attuned software services industry as well as vibrant capital markets – which India opened up to the world faster than China – helped spawn entrepreneurship and create a middle class. Hundreds of millions were lifted out of poverty; the 1990-91 crisis became the starting point of two decades of rising prosperity.

All that progress is now at risk because of a very different failure. Growth is crashing. Jobs have gotten scarce. Investments have cratered. Profits have vanished. Tax collections are low; government deficits high. Debt has surged, but there isn’t enough loss-absorbing cushion either on corporate balance sheets or with financial intermediaries to allow orderly deleveraging. India isn’t in the midst of an external crisis. It’s grappling with a vicious internal cycle of defaults. 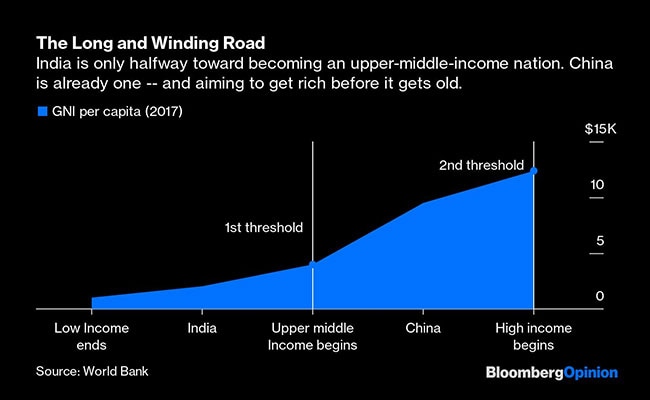 More crucially, what’s missing is the national determination of the 1991 reforms. Economist Manmohan Singh, then a newly appointed finance minister who later became premier, invoked Victor Hugo in his budget speech: “No power on earth can stop an idea whose time has come… the emergence of India as a major economic power in the world happens to be one such idea.”

Unlike Singh, current Prime Minister Narendra Modi is a career politician who won a resounding popular mandate in 2019 for a second five-year term. There’s no dearth of slogans and goals – such as a $5 trillion economy by 2024 from under $3 trillion now. Yet except for a recent move to make India a low-tax enclave for manufacturing units fleeing the U.S.-China trade war, there isn’t much of a plan in place. It’s not even clear if a search for enduring solutions will get under way in 2020, or if the economy will just muddle through.

Today’s problems result from past successes. In a withering critique of what he calls a “finance-construction growth model,” Princeton University economist Ashoka Mody has rightly blamed India for ignoring labor-intensive manufacturing. The country has shortchanged its blue-collar workers, especially women, whose participation rate in the workforce has swooned. A nation of 1.3 billion people is producing only what 150 million affluent customers want.

With rampant automation everywhere, a bulging low-cost labor force isn’t the advantage it once was. Even in software exports, cloud computing and digital technologies have diminished the value of work done by Infosys Ltd. and Tata Consultancy Services Ltd. engineers in maintaining bulky enterprise software for global corporations. Can India in the 2020s try to reinvent its finance-construction model so that it works for everyone and not just for a few thousand financiers in Mumbai? Here are some ideas.

First, India must reinvent infrastructure financing. The sudden collapse of highly rated infrastructure operator-financier-owner IL&FS Group in September 2018 was the last straw. The nation was already reeling under a disastrous 2016 ban on 86% of the currency in circulation. PM Modi’s demonetization failed in its goal of freezing out ill-gotten wealth: It depressed consumption and pauperized farmers and tiny businesses instead. Then came a botched-up goods and services tax in 2017. After IL&FS went under, the economy gave up.